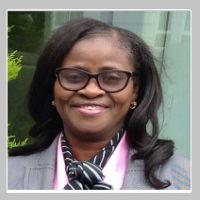 Gloria Oiyahumen Anetor is a First-Class graduate of the University of Ibadan in Health Education and was a Federal Scholar for her undergraduate studies. She obtained the doctorate from the same University in Health Education with a focus on nutrition education. She was mentored by late Professor James Abodurin Ajala Ed.D., M.P.H. (Boston University, USA), a renowned public health and health education specialist and Professor Benjamin Ogundele, PhD (Ibadan, Nig.). She also obtained a master’s degree in Public Health from University of New England, Maine in the United States of America. Her initial background was in Nursing, where she holds three diplomas (Nursing, Midwifery and Perioperative Nursing). As a professional Nurse, she rose to the rank of Assistant Director Nursing (ADN) at the University College Hospital (UCH), Ibadan from where she joined academics. She is currently an Associate Professor of Health  Education and Promotion in the Department of Human Kinetics and Health Education, Faculty of Education, National Open University of Nigeria (NOUN).

She is a member of many learned societies, including the Nigerian School Health Association (NSHA), American Public Health Association (APHA), American Psychological Association (APA), African Council for Distance Education (ACDE). She is a member of International Union of Health Promotion and Education, France (IUHPE, Fr.), She is also a member of the Institute of Health Promotion and Education, United Kingdom (MIHPE, U.K.), Fellow of the Society of Public and Environmental Health, Nigeria (SEPHON, Nig.)  and Fellow of the Royal Society of Public Health, United Kingdom (FRSPH, U.K.).

She has published many scholarly articles in national and international journals. She has also attended major national and international conferences, workshops, and seminars among which are Management of Child and Adolescent Obesity organized by the University of British Columbia, Canada, International Business and Education, Clute Institute, London and the World Distance Education conference by the International Council on Distance Education (ICDE), UNISA South Africa and Meetings by Society of Toxicology (SOT) of the United States in Arizona, San Diego and Baltimore. She was also a visiting scholar to Florida International University (FIU), Miami, Florida in United States, 2018.